The biggest news in the cryptoverse for Nov. 14 includes Crypto.com CEO saying his exchange accidentally transferred 320,000 ETH to Gate.io; Kraken, Coinbase, and Gate.io publishing full proof-of-reserves with liabilities, and Binance launching a recovery fund for strong projects caught up in the FTX collapse.

Concerns over Crypto.com’s  320,000 ETH transfer to Gate.io, and sluggish withdrawal process raised speculations that Crypto.com may be on the verge of a collapse.

However, the exchange CEO Kris Marszalek in a recent AMA said that the insolvency rumors were false, adding that business activities were going normally. According to Marszalek, Crypto.com’s soon-to-be-published audited proof-of-reserve will verify that the platform is solvent.

Crypto.com transferred nearly 85% of ETH reserves to Gate.io in October, CEO assures it was accidental

In the wake of the FTX collapse, the crypto community has raised concerns that the crypto exchanges may have intentionally inflated their reserve holdings.

In his defense, Crypto.com CEO Kris Marszalek said that the funds were mistakenly sent to Gate.io, but was returned immediately.

Huobi Global published its proof-of-reserve on Oct. 13, which showed it held 14,858 ETH in the Huobi 34 wallet. However, shortly after the snapshot was published, WuBlockchain pointed out that 10,000 ETH left the wallet, raising concerns over a “fake reserve snapshot.”

According to Huobi, the hot wallet usually sees inflows and outflows frequently. As such, the 10,000 ETH outflow was not intended to inflate the reserve.

Kraken, Coinbase and Gate.io publish proof of reserves with liabilities

Crypto exchanges Kraken, Coinbase, and Gate.io has moved to publish a comprehensive proof-of-reserve to assure customers of their liquidity.

The proof-of-reserve of the three exchanges disclosed their total liabilities, alongside assets holdings.

President of El Salvador says ‘FTX is the opposite of Bitcoin’

However, he proclaimed that Bitcoin was designed to prevent Ponzi schemes as transactions are open-source for public verification.

Former Huobi CEO Leon Li has offered to issue a $14 million loan to help a subsidiary of New Huo Technology (Hbit Limited) cover all funds locked up in the bankrupt FTX.

Hbit reportedly has about $$13.2 million of customers’ assets and $4.9 million of its asset locked up in FTX. The $14 million loan from Leon Li will help the exchange compensate all affected users in full.

In the wake of the widespread market contagion caused by the FTX collapse, Binance CEO Changpeng ‘CZ’ Zhao said that his exchange would launch an industry recovery fund to help strong projects facing financial distress.

Industry experts including Tron (TRX)founder Justin Sun and investor Simon Dixon said they would contribute to the initiative to help good builders and developers recover from the crisis.

Following the FTX collapse, U.S. Congressman Brad Sherman said that the donations were a sinister plan to influence crypto regulation to FTX’s favor.

Sherman called on the SEC to take decisive actions and proffer a clear regulatory framework to prevent shady deals in the crypto industry.

John E. Deaton that the SEC Chairman Gary Gensler’s relationship with FTX may have influenced the commission from issuing clear guidelines to regulate the crypto industry.

Deaton went on to argue that former SEC Director William Hinman’s foul play with Ethereum has roped in Ripple with the SEC. Hoskinson moved to dismiss Deaton’s argument stating that a “free pass” on Ethereum’s status has no effect on Ripple’s lawsuit.

In response, Ripple CTO Joel Schwartz said that the SEC’s move to classify Ethereum as a commodity and XRP as a security was unfair.

FTX CEO and Chief Restructuring Officer John Ray said that in efforts to restructure the bankrupt crypto exchange, it will remove all trading and withdrawal functions from the platform, and move all available crypto assets to a new cold wallet.

Founder of the bankrupt FTX empire Sam Bankman-Fried (SBF) reportedly leveraged a secret code in its accounting software to transfer some $10 billion to Alameda Research notifying anyone of the transaction.

When questioned about the missing funds, SBF did not provide any clear explanation.

Binance CEO Binance CEO Changpeng Zhao during an AMA on Twitter Spaces said his exchange was not adversely affected by the FTX collapse. He added that Binance adding was working to support some strong projects to recover their losses.

On the way forward, CZ said Binance will work with Vitalik Buterin on his proposed Proof-of-Reserves protocol and establish a global association of key players to cater to the development of the crypto industry.

According to Bitcoinity data, bitcoin trading volumes across 10 leading centralized exchanges decreased from 182,000 BTC per day on Nov. 9 to 38,000 BTC on Nov. 13.

On-chain data shows that Huobi, Gate.io, and Crypto.com saw most of their Bitcoin balances flow into FTX, in the months preceding the FTX collapse. 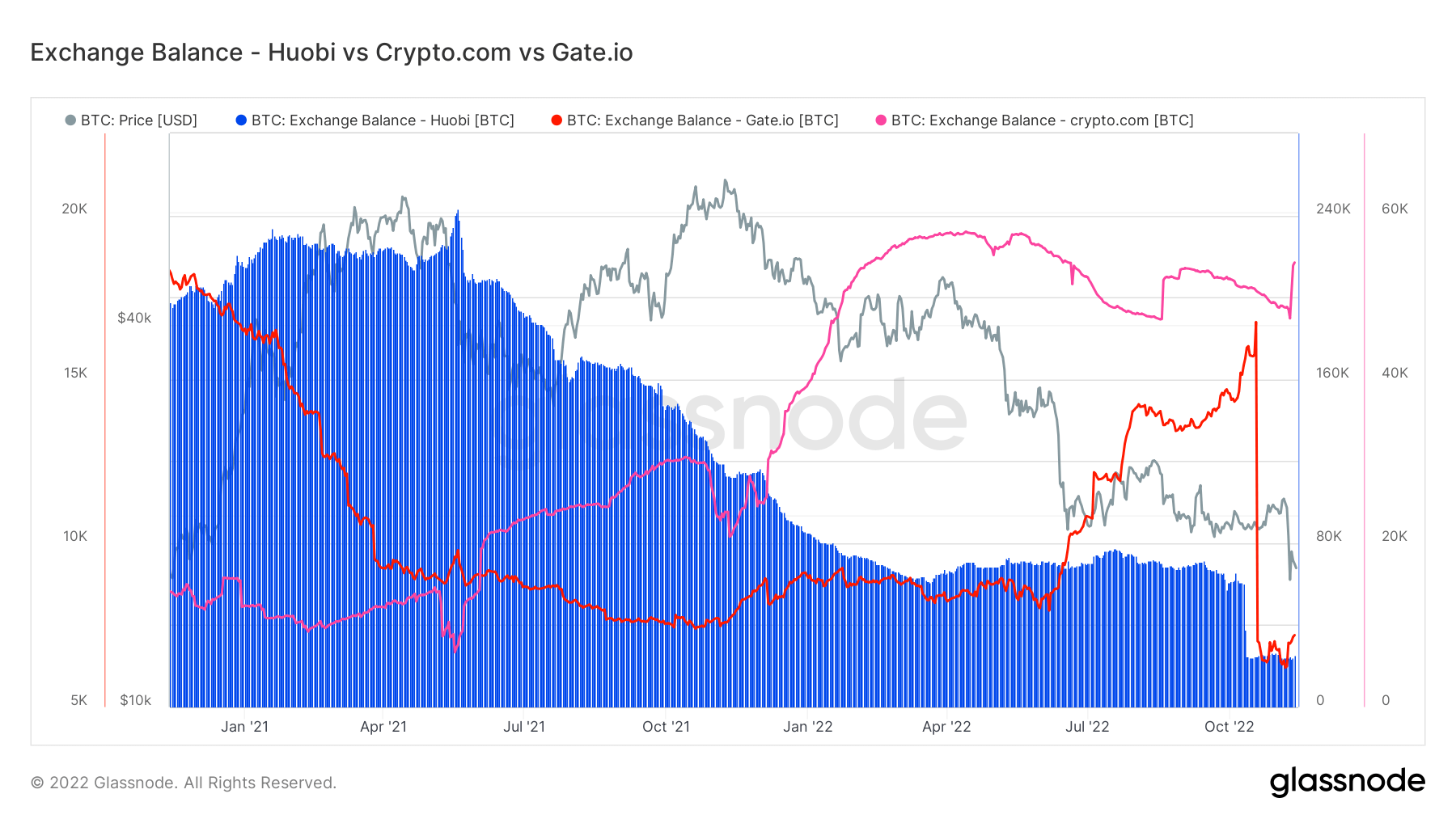 At the beginning of October, Bitcoin flows from Huobi to FTX tripled, while Gate.io saw a surge from late October into November before the contagion started.

To curtail insolvency risk playing out on centralized exchanges may retail investors have moved their Bitcoin for self-custody on cold wallets.

According to CryptoSlate analysis, the total BTC balance across exchanges has declined by 72,900 BTC in the last seven days. In addition, over 1 million ETH has also gone into cold wallets, following the FTX fallout.

Bitcoin’s recent fall to $15,682 led to aggressive accumulation for investors of all classes.

On-chain data analyzed by CryptoSlate reveals that Shrimps (investors with less than 1 BTC) took advantage of the price crash to increase their positions, to a new high of 1 million BTC, while Crabs (investors holding between 1 BTC to 10 BTC) saw their total holdings surge up to 2.8 million.

BTC Whale who hold more than 1000 BTC also took advantage of the cheap BTC price to increase their holdings, though not as much as the Shrimps, Crabs, and Sharks.

News from around the CryptoVerse

Alameda was reportedly holding about $60 million worth of 18 tokens that were to be listed on FTX between January 2021 and March 2022.

Nike teams up with Polygon

Leading fashion brand Nike has partnered with Polygon Network to create digital collectibles for its community.

No spam, notifications only about new products, updates.
PrevPreviousRetail traders massively withdraw their BTC from exchanges
NextBlockFi has ‘significant exposure’ to FTX, denies talk of majority of assets being custodied at FTXNext
On Key