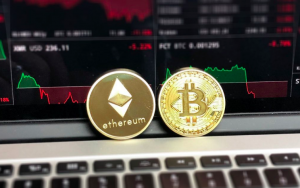 BTC/USD extended the gains clocking $5,340.75 (on Coinbase) on Wednesday following the initial break above $5,200. The two-day surged court many traders by surprise. Bitcoin added more than $1,300 in less than 48 hours to market the end of the extended consolidation between $3,500 and $4,200. Following the retracement from the highs around $5,343 Bitcoin is calm above $5,000.

According to the data on CoinMarketCap, BTC/USD is up 0.34% in the last 24 hours. The largest cryptocurrency is trading at $5,043.24. Although the uptrend seems to have slowed down, it is evident that the current price is supported by high trading volume above $20 billion. Moreover, Bitcoin’s market cap has been rising since March 26 at $69 billion to the current $88 billion.

As far as the short-term trend is concerned (1-hour chart), Bitcoin is poised for upside movement above the 50 SMA. A forming bullish momentum is trying to push the price towards $5,200. However, the almost horizontal RSI 1-hour stipulates that BTC/USD likely direction of movement is sideways. Therefore, it is essential that the bulls defend support at $5,000 to avoid losses towards the second main support at $4,800.

Also Read: Bitcoin [BTC] ‘Investors are not scared of sell-offs’: Leading Analyst Weighs In on The Rise

Ethereum moved closer to the seller congestion area at $180. The price battled to break above the zone but lost momentum during the evening (GMT) session on Wednesday. The slide that followed pulled ETH/USD back below $170 before the crypto settled in the buyer congestion zone above $160. At press time, Ethereum is still range-bound within in this region with an upside limit at $164.00.

Marginally above the range limit is the 50 SMA 1-hour. Ethereum must correction above the range resistance and find support past the 50 SMA hurdle for a retracement towards the congestion zone around $180. Meanwhile, the price is dancing at $161.36 while trending sideways. The RSI is confirming the sideways trend which is likely to continue in the coming sessions on Thursday.

The post Market Update: Bitcoin [BTC] Hangs in the Balance as Ethereum (ETH) Defends Supply one appeared first on Coingape.

No spam, notifications only about new products, updates.
PrevPreviousEthereum [ETH]: Vitalik Lists Down Four Major Hurdles in Implementing Proof-of-Stake
NextMining Pools Decide on Distribution of 23,000 ETH in Fees from Abnormal TransactionsNext
On Key

The crypto market witnessed yet another crash last week. Bitcoin prices were expected to hold the $20,000 price mark, but failed to do so as prices fell and reached a low of $18,500. Today, this low price turned to become a strong support for the medium-term. Will Bitcoin go up? Is the Bitcoin consolidation a

Besieged crypto-centric firm Celsius has continued to repay loans owed to various lenders as it charts a way forward to recovery. Since it announced that it was pausing all withdrawals, swaps, and transfers between accounts citing “extreme market conditions,” the firm has been forced to double down on its repayment figures to avoid being forcibly

The world’s largest cryptocurrency, Bitcoin’s (BTC) price has registered a drop of around 56% in the second quarter of 2022. This has been recorded as the worst drop over the last 11 years. Bitcoin registers 2nd worst quarter According to Arcane Research, the unfavorable macroeconomic outlook has affected the global crypto market. However, it is